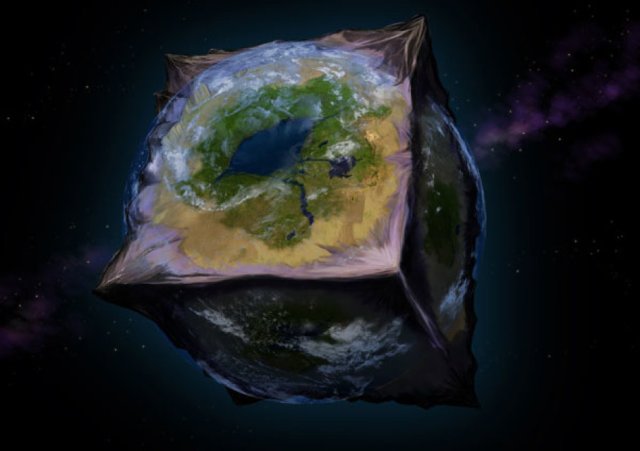 Many Christians believe that they are connecting to the true Messiah Yeshua (Jesus Christ) during Christmas, but historical proof as well as Scriptural evidence reveals a different eternal reality.

First, always remember that Yeshua celebrated Hanukkah, not Christmas (See John 10:22-23). He has shown us the way of life during the winter one-der-land season; but more than that He has virtually shown us the eternal reality of the One New Man in the Messiah, which in its fullness is called Metatron.

In contrast, the world currently has a false Metatron figure called Metatron Mithra. Metatron Mithra is said to be the god of agriculture and time too. Metatron Mithra embodies the false control of space-time.  Stick with me as we paint a picture of Christmas being part of the illusion of space-time that’s connects its adherents to religious Babylon and Saturn (Satan – the prince of this world).

For simplicity sake, we are going to continue to contrast Metatron Messiah with Metatron Mithra. Let’s unlock the Metatron Mithra piece first. The demonic control of space-time is literally connected to Metatron Mithra. If you and I want to manifest resurrection life and become just like Jesus (connected to the fullness of the heavenly One New Man in the Messiah), we will all have to deal with this issue.

For over 8 years now, I have repeatedly revealed that there were two immediate predecessors for Christmas before Rome officially assimilated it into its official church calendar in the fourth-century:

Did you catch that? The worship of Metatron Mithra is literally the root of Christmas Day. Mithra was the Persian form of the pagan sun god. The birthday of all sun gods throughout all cultures was celebrated on the ancient winter solstice December 25th before the Roman shift in time. This is a major anchor for tethering God’s people to the illusion of the corrupted reality of space-time.

[2] CHRISTMAS SEASON’s immediate predecessor was the ancient Yuletide Season called the Saturnalia. The Saturnalia took carnal indulgences to an extreme. Nine months later all the illegitimate children birthed from the occasion were called Saturnians. When the faithful heathens worshipped Saturn, no fleshly indulgence was too extreme… including adultery, fornication, reveling, idolatry, murder, etc. You get the idea. The worship of Saturn during the winter solstice season basically fills out the list of the works of the flesh that we are not supposed to do if believers want to inherit the Kingdom of God (1 Cor 6:10-11; Gal 5:19-21).

When the High Priest Aaron fabricated a golden calf to depict God, he was looking back to Egypt to the Apis bull. This golden calf was said to represent the divinity of the ancient Chaldean (Babylonian) god – Saturn.

Which bring us to our topic at hand – being tethered in an unholy way to space-time. The worship of Saturn has been anciently connected to the Black Cube. The Black Cube is the antithesis of the Golden Cube of the New Jerusalem. The Black Cube represents the “god of this world” control of time and space.

Christmas Day and the Christmas Season is a double tether to anchor you to the false reality that the “god of this world” has to offer. It time to take the red pill or the blue. Are you going to be hot for Metatron Messiah and His glorious eternal reality, or are you going to be cold choosing Metatron Mithra instead? God is so good. We each get to choose.

Robin's premier quest is to love people and love God with all her heart, soul & strength, because without love we all are nothing. After making a vow to Jesus's face during a personal epiphaneous appearance, she wrote a book -- SANTA-TIZING: What's wrong with Christmas and how to clean it up" to share the mysteries she discovered while searching for where Christmas comes from. There are revelations in SANTATIZING that you will not find anywhere else. So throw away the template for Christmas books and come walk on the kingdom side in an examination of America's most loved holiday. Critical thinking is a must while looking through this lens of history and Scripture. You'll be intrigued and enlightened. What's wrong with Christmas? Plenty. This book shines light on various troubling issues in celebrating a Christian Christmas. How to clean it up? This will be determined by you and your family. Since we have an abundance of traditions, memories, and reasons to stay just the way we are (and possibly miss out on becoming part of His Pure & Spotless Bride), SANTA-TIZING primarily explores the valley of the shadows. Please know that in God's Kingdom no person is forced to do anything against their will. Give em heaven!!!
View all posts by Robin Main →
This entry was posted in 144000, Babylon, Chanukah, Christmas, Hannukah, Melchizedek, Pure & Spotless Bride and tagged Aaron, Black Cube, Catholic Encyclopedia, Christmas comes from, Christmas Day, Christmas Season, CHRISTMAS TETHER TO SPACE-TIME, December 25th date, False Messiah, god of agriculture and time, Golden Calf, Golden Cube, Hanukkah, Jesus Christ, keeper of space-time, keeper of time, mature head of Yeshua, Messiah, METATRON, Metatron Messiah, Metatron Mithra, Mithra, Mithra's Winter Festival, New Jerusalem, One New Man, One New Man in Christ, One New Man in Messiah, Saturn, Saturnalia, space-time, TETHER, TETHER TO SPACE-TIME, the nativity, The Nativity of the Sun, The Nativity of the Unconquered Sun, True Messiah. Bookmark the permalink.

10 Responses to CHRISTMAS TETHER TO SPACE-TIME