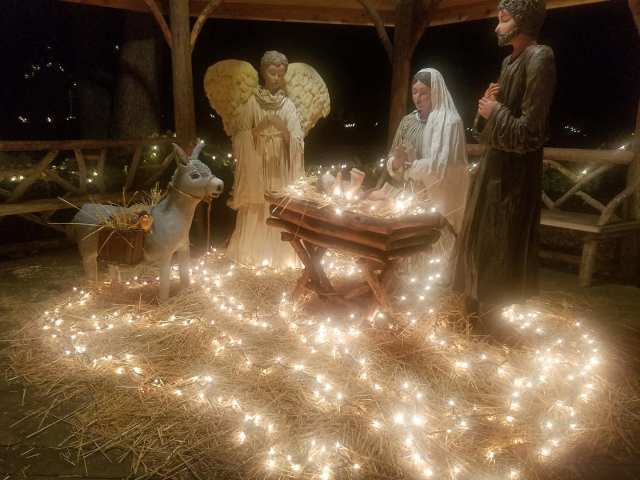 It is extremely significant that at the same time Aaron made an altar to God’s specifications, took the people’s gold and made a golden idol, Moses received the nation’s ketubah (marriage contract), which contained the Ten Commandments. Refer to https://santatizing.wordpress.com/2016/12/17/choose-this-day-the-golden-calf-or-his-marriage-contract/.

Believe it or not, choosing the Golden Calf or the Lord’s Marriage Contract is critical in our searching out the Biblical view of Christmas manger scenes. To help in our assessment, I have taken a couple sections from my book SANTA-TIZING: What’s wrong with Christmas and how to clean it up. Know that most things I write about in this book I have personally struggled with in order to please God fully and wholly:

“Even while these people were worshiping the LORD, they were serving their idols. To this day their children and grandchildren continue to do as their fathers did” (2 Kings 17:41). We need to lay aside our own preconceived notions and ask ourselves: How does Jesus view Himself being depicted as a statue in crèches during Christmas? It may surprise many Christians that some of the crèche fixtures aren’t described in the Bible: the donkey, cows, sheep, and the wise men. Scripture articulates that the Magi came to a house not a manger (Matt. 2:11). If one considers that, historically, the Babylonian statues depicting a Madonna and child were used to facilitate worship to pagan gods, one must ask, what does Jesus really think of those statues of Him lying in a manger? And do my beliefs violate Scripture? “It is a snare for a man to devote rashly something as holy, and afterwards to reconsider his vows” (Prov. 20:25 NKJV).

To accurately answer these important questions, we have to look into the first two commandments of the Ten Commandments with the same viewpoint of Jesus and His first disciples. The first commandment to a Hebrew is to have faith in God’s existence: “I am the LORD your God, who brought you out of Egypt, out of the land of slavery” (Exod. 20:2). This first commandment appears to be more of a statement than a commandment. Maybe that’s why these words in Hebrew are called the Ten Statements instead of the Ten Commandments. There have been considerable controversies among Jewish scholars over whether the first statement commands belief in God or belief can’t be commanded. Most Jewish authorities agree with the great Jewish philosopher Maimonides that belief in God is not only desirable, but is indeed commanded.

God’s people were taught that if they violated one of the first five commandments, they had sinned against God and they had to reject their belief in God at the outset. “Without faith it is impossible to please Him, for he who comes to God must believe that He is, and that He is a rewarder of those who seek Him” (Heb. 11:6 NASB). “I am the LORD your God, who brought you out of the land of Egypt, out of the house of slavery” (Exod. 20:2 NASB) is both a positive command and a simple statement of fact. “I am the LORD your God” announced that He is Israel’s deity and sovereign. Laws are not official until the authority of the One in charge is established and acknowledged. Just think about the first commandment as an opening statement in a treaty (marriage contract) between God and His people.

For years, I was confused over the church saying that the first commandment is: “You shall have no other gods before Me” (Exod. 20:3), and the second is: “You shall not make for yourself a carved image . . .” (Exod. 20:4-5). To me they seemed redundant. Why? Probably because the Hebraic view of our Bible tells us that they are different sections of the same commandment.

Exodus 20:3-6 delineates the second commandment: “You shall have no other gods before me. You shall not make for yourself an idol in the form of anything in heaven above or on the earth beneath or in the waters below. You shall not bow down to them or worship them; for I, the LORD your God, am a jealous God, punishing the children for the sin of the fathers to the third and fourth generation of those who hate me, but showing love to a thousand [generations] of those who love me and keep my commandments.” The Second Commandment has four separate negative injunctions against idolatry where:

1) A person is forbidden to believe in idols. We are told every Christmas season to believe in the spirit of Christmas, and as Christians we try to personalize this spirit as the Holy Spirit. But it’s not. It’s make-believe. The pagans inform us: “Take the spirit of Christmas himself—Santa Claus, Father Christmas, Saint Nicholas, Old St. Nick, Syre Christemas, Sinter Class—his names are legion and his true origins almost as old as history.” I have noticed over the past several years that whenever anyone mentions believing in the spirit of Christmas, Santa Claus is referenced. The Polar Express movie swept the country during the 2004 Christmas season. All the train tickets that the kids in the movie received spelled out two letters of the word “believe.” The boy who held the only winning “BE” ticket had to first say “I believe” three times before he could receive the first gift of Christmas—a bell from one of Santa’s reindeer. Kids who believe in Santa can hear the bell; but their parents can’t, due to their unbelief. For several years, the annual Fort Collins Symphony Guild’s Christmas concert’s theme has been “Truly Believe,” with its focus on Santa. I know of one family in my son’s grade school who are atheists. They try to fill their spiritual void with at least one belief besides being the best in everything, which is perpetuating the Santa Claus myth so their fifth-grade child can still accept it as true. A Christian should question anything that is based on lies and deceptions, for these vices are not of God’s kingdom.

2) A person is forbidden to make or process idols. “Of what value is . . . an image that teaches lies? For he who makes it trusts in his own creation; he makes idols that cannot speak” (Hab. 2:18).

3) A person is forbidden to worship idols through any of the four forms of divine service, which are:

4) A person is forbidden to worship an idol by means that is unique to it. For example, the believers of Mercury worshiped it by throwing stones at its statue. What about all of our Christmas traditions? What about our stockings that are hung by the chimney with care? What about our Christmas trees, which are an extension of an ancient Babylonian practice? Etc.

Aaron and the Jewish people of his day were so strongly and grossly sensual, they did not imagine that this image was itself a god nor did they plan to terminate their adoration. They made the golden calf a representation of the true God, whom they intended to worship in and through this image. Remember when you regard Christmas being the golden calf of America that His thoughts are not like ours, nor are His ways like ours (Isa. 55:8). The more I contemplate the manger scenes at Christmas time, the more I see that it is indeed a “golden” commemoration of Christ’s birth. The truth and beauty that Christ came as a babe in a manger does not give us license for it to be set aside for a particular purpose with the literal graven image of Jesus wrapped in swaddling clothes, funneling worship. This concept also applied to the golden calf. The truth and beauty of God bringing His people out of Egypt and taking them to the Promised Land did not justify the creation and worship of the golden calf. It seemed that the Israelites forgot that the Lord already had instituted a festival for His family called Passover for these exact same purposes; and He set it as a permanent or eternal ordinance (Exod. 12:14). Will we follow history in choosing to party with the crowd and their golden calf, or will we choose to party at the wedding feast of the Lamb with the King of Kings?

Christians say Christmas only represents a truth in God’s Word and that the baby Jesus is merely a representation of the Most High, whom we intend to worship in and through this image, not the image itself. As with the golden calf, it is not a sufficient plea that we do not worship the image, but God through the image. A feast said to be a feast to Jehovah is not necessarily as we say. God will be the Judge.

Robin's premier quest is to love people and love God with all her heart, soul & strength, because without love we all are nothing. After making a vow to Jesus's face during a personal epiphaneous appearance, she wrote a book -- SANTA-TIZING: What's wrong with Christmas and how to clean it up" to share the mysteries she discovered while searching for where Christmas comes from. There are revelations in SANTATIZING that you will not find anywhere else. So throw away the template for Christmas books and come walk on the kingdom side in an examination of America's most loved holiday. Critical thinking is a must while looking through this lens of history and Scripture. You'll be intrigued and enlightened. What's wrong with Christmas? Plenty. This book shines light on various troubling issues in celebrating a Christian Christmas. How to clean it up? This will be determined by you and your family. Since we have an abundance of traditions, memories, and reasons to stay just the way we are (and possibly miss out on becoming part of His Pure & Spotless Bride), SANTA-TIZING primarily explores the valley of the shadows. Please know that in God's Kingdom no person is forced to do anything against their will. Give em heaven!!!
View all posts by Robin Main →
This entry was posted in Christmas, Melchizedek, One New Man in Christ, Pure & Spotless Bride and tagged A person is forbidden to believe in idols, A person is forbidden to make or process idols, A person is forbidden to worship an idol by means that is unique to it, A person is forbidden to worship idols, Babylonian statues depicting a Madonna and child were used to facilitate worship to pagan gods, Biblical view of Christmas manger scenes, Biblical view of Nativity scenes, choosing the Golden Calf or the Lord’s Marriage Contract, Exodus 20:3-6 delineates the second commandment, first two commandments of the Ten Commandments with the same viewpoint of Jesus and His first disciples, party at the wedding feast of the Lamb with the King of Kings, party with the crowd and their golden calf, spirit of Christmas is Santa Claus, statue in crèches during Christmas, What about our Christmas trees, What about our stockings that are hung by the chimney with care?. Bookmark the permalink.